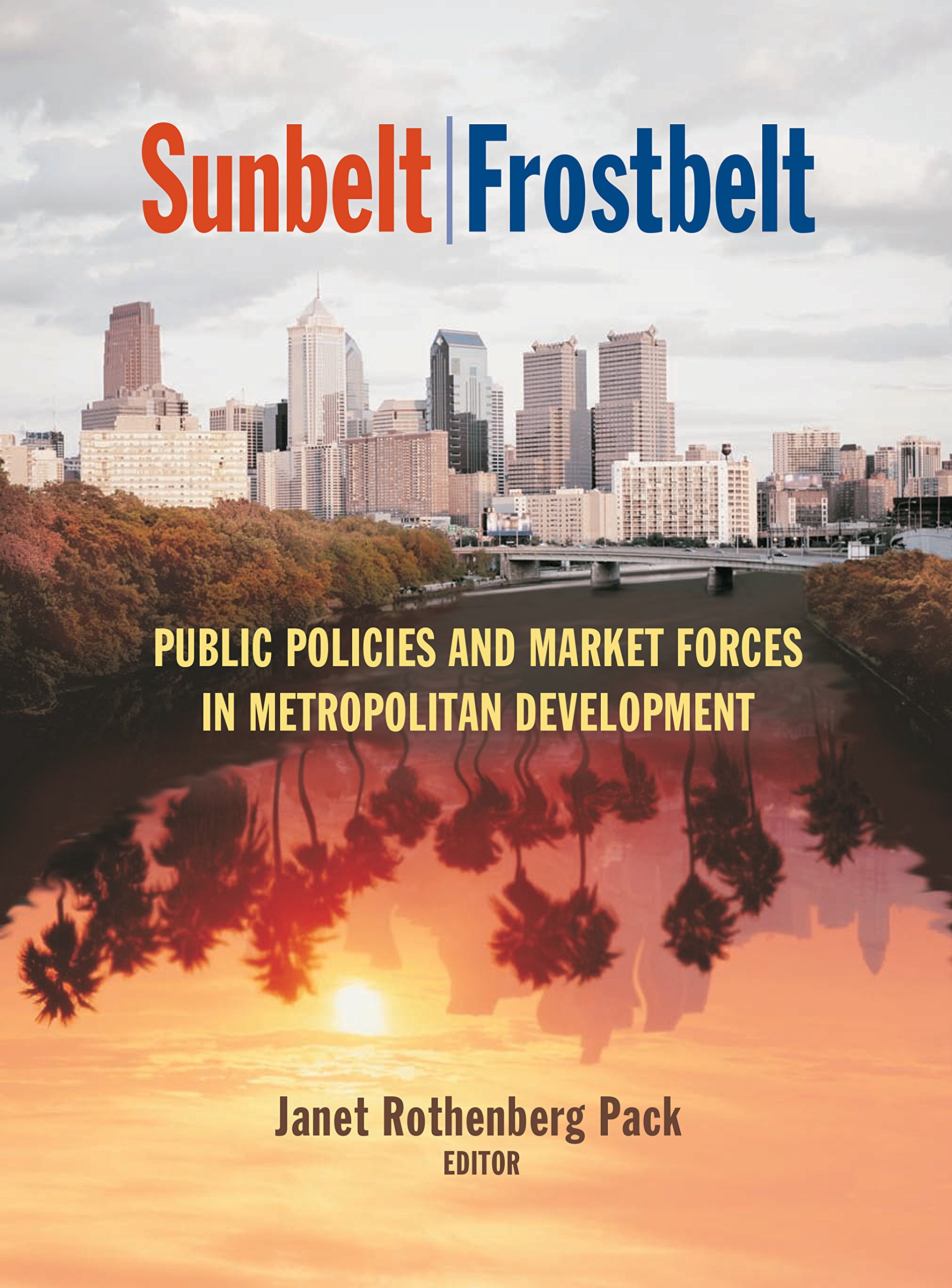 Metropolitan growth and development results from a complex mix of factors. Consumer preferences, growth and geographical shifts in population, increasing incomes, market restructuring, quality of schools, and location of affordable housing are just a few that play a critical role. Other important influences include state and local interactions, historical circumstances, and the natural topography of a metropolitan area. Federal and state policies, taken together, set the "rules of the development game" that tend to facilitate economic decentralization, the concentration of poverty, and greater fiscal and racial disparities between communities. In S unbelt/Frostbelt, Janet Rothenberg Pack and her contributors examine the role of market forces and government policies in shaping growth and development patterns in major metropolitan areas. The findings are a result of a multiyear project analyzing five different locales: two sunbelt metro areas (Los Angeles and Phoenix) and three in northern climes (Pittsburgh, Chicago, and Philadelphia). Through its intensive study of these areas, the book offers a deep understanding of the federal policies and diverse market forces that have affected urban development patterns in the last few decades. Despite the diversity of the cities, the contributors find remarkable similarities in the problems they face. Urban sprawl and spatial inequality are among the common challenges attributable to market forces and public policies. Despite the many similarities, the book finds important differences in the extent of the problems and recommends numerous policies for remedying them. It concludes by examining how these different sunbelt and frostbelt metro areas have attempted to adopt policy reforms that address their unique growth challenges. Contributors include a team of researchers from Arizona State University, Peter Dreier (Occidental College), Robert E. Gleeson (Northern Illinois University), Joseph Gyourko (University of Pennsylvania), Pascale Joassart-Marcelli (University of Massachusetts, Boston), Manuel Pastor Jr. (University of California, Santa Cruz), Jerry R. Paytas (Carnegie Mellon University), Joseph Persky and Kimberly Schaffer (University of Illinois at Chicago), Anita A. Summers (University of Pennsylvania), Wim Wiewel (University of Baltimore), and Jennifer Wolch (University of Southern California).

Read NOW DOWNLOAD
These days there are many sites readily available for free to view Sunbelt/Frostbelt: Public Policies and Market Forces in Metropolitan Development (James A. Johnson Metro Series) files or library on the internet, this website is one of them. You do not always be forced to pay to look at free of charge Books. We now have detailed the most effective doc around the globe and gather it so that you can see and download it free of charge. We have plenty of files directories able to observe and download in every file format and top quality